“you shall be only oppressed and plundered continually, and no one shall save you.”

(quoted on 3/10/08 from the post The Iran Symbol, The Falsifiers and the Republican Prophecy)

LastDayWatchers you seen how the May 15th Prophecy with 100% accuracydeclared unto how the Pawn of Satan George W Bush political house would be soundly defeated and how that curse would be transfered to President Obama if he unfaithfully went forward with a forward agenda (See: God Message To President Obama & The Answer to Jacob Riddle)

“Two years ago, Barack Obama promised change. Tuesday, the voters made a change of their own”

In a tidal wave of anger and anxiety, they voted President Barack Obama’s Democrats out of office from coast to coast, sweeping them out of power in the House of Representatives and slashing their once near-invincible numbers in the Senate. Democrats appeared likely to hold a narrow Senate majority.

“Many voters said their vote was a message against Obama, not in favor of Republicans. In fact, the GOP’s standing remains as dismal as that of the Democrats. In the exit polls, each party was viewed unfavorably by a majority of those surveyed”

Thus saith The Lord,  the Amen, the faithful and true witness, the beginning of the creation of God to the remnant of Joseph especially these new “Republicans”

“The stench of your foul order; coming from your embrace of the Pawn of Satan; has reach up unto my nostrils which will cause me to vomit you out of my mouth; be zealous therefore, and repent.”

Texas for Pawn of Satan George W Bush, which has brought on the Texas Curse. 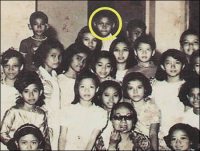 Because God would increase his curse 4 times upon him, Indonesia & Hawaii are the places where President Obama essentially have been raised with Chicago & Washington his official declared homes

Consider that as you view the  popcorn popping! 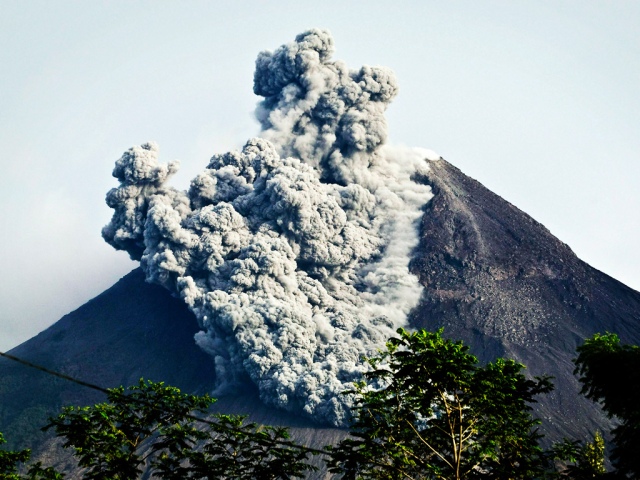 The Indonesian volcano Mt. Merapi erupted on Wednesday in its biggest explosion so far

“The eruption lasted more than an hour and shot searing ashes miles into the sky. Panicked people in Umbulhardjo refugee camp screamed and children cried when they saw the volcanic materials hurled into the sky and down the mountain’s slopes.


“This is an extraordinary eruption, triple from the first eruption” on Oct. 26, government volcanologist Surono said.


The volcano and tsunami that hit another part of the country last week have claimed nearly 470 lives and sent tens of thousands crowding into emergency shelters. Relief operations are expected to take weeks, possibly months.”


“For almost 410 years the volcano showed no dangerous volcanic activity, which was why it was categorized as a dormant or type B volcano,” Kaban told The Jakarta Post.


The Volcanology and Geological Disaster Mitigation Center (PVMBG) announced that the eruption set a historical precedent.


“This is the first time in our history that a type B volcano suddenly turned into a dangerous one, or a type A volcano,” PVMBG head Surono said after meeting with provincial officials Sunday.”

In the last two months because they have shown an increase in activity, said Syamsul Rizal, a state volcanologist, said Monday. Many of those are already rumbling and belching out heavy black ash.


It is rare for any to be at second-highest — which signifies an eruption is possible within two weeks.”

Although the firebursts look spectacular, there were no immediate signs of major eruption, said Anton Tripambudi, a government seismologist.


The mountain, about 80 miles west of Jakarta, was formed after the Krakatoa eruption of 1883, the largest volcanic eruption in recorded history that, along with a tsunami, killed at least 36,417 people. He said such an increase could indicate “a major plate restructuring” — a major shift in the plates’ position, rather than simply the usual jostling.


“That would be significant.”

So that you will see exactly where are his fingertips?, which are pointing to his curse even his middle finger as the May 15th Prophecy have said with 100% accuracy in the post


The Curse Of The Bush Administration

“At least 120 people have been killed in over a dozen coordinated bomb attacks in and around the Iraqi capital, Baghdad


The war-torn country has been under almost daily attacks over the past weeks, resulting in the death and injury of many civilians and security forces.


The United States invaded Iraq in 2003 under the pretext that country was in possession of weapons of mass destruction, but such weapons were never found.


Despite the withdrawal of US combat forces, Iraq continues to host some 50,000 American troops that remain in the country for “advising and training” purposes”

“An al Qaeda attack that killed 52 hostages and police in a Catholic church in Baghdad was aimed at driving the embattled Christian minority out of the country, Iraq’s human rights minister said on Monday


“What happened was more than a catastrophic and tragic event. In my opinion, it is an attempt to force Iraqi Christians to leave Iraq and to empty Iraq of Christians,”

“Two-third of Iraq’s Christians have fled their homes – many abroad – according to Human Rights Watch. While they made up less than 5 percent of Iraq’s population when the war began (about 1 million), they now constitute an estimated 10 percent of internally displaced Iraqis and 20 percent of Iraqi refugees in neighboring nations, according to a 2009 report from The Christian Science Monitor.”

Their displacement not only threatens to end Christianity’s 2,000-year history in Iraq, it also deprives the country of a huge swath of middle-class professionals at a critical time”

Now notice the “coincidence” of the declared home the May 15th Prophecy told you with 100% accuracy as the extension of terror expand!

Chicago-bound explosives same as those used in Detroit plot

“the battlefront has moved to Yemen — the Obama Administration had better start boning up on Yemeni tribal politics.”


The German authorities are very worried.


At least 70 Germans are thought to be in training camps, with about 200 travelling there in the last two years.”

LastDayWatchers you seen how the May 15th Prophecy with 100% accuracyhighlighted the symbols made by Iran God would allow; to give indication of the estate of the little horn uprooting the first 3 horns by the roots, causing the United States power and influence to be greatly diminished almost to non existences

“Iranian President Mahmoud Ahmadinejad’s visit to Lebanon, which began on Wednesday, aims primarily to serve Iran’s international strategies against Israel and the US, a number of analysts told The Daily Star on Wednesday. While the three-day stay also underscores the regional importance of Hizbullah as Iran’s proxy militia here


Ahmadinejad is sending a dual message, one to the US and one to the Israelis.”

Ahmadinejad is saying to Israel that “the forward division of the Revolutionary Guard Corps is here, and they are awaiting my signal, so you better sober up – don’t so something rash,” Khashan said. “They see Lebanon as Iran’s first defense line. He will give the Israelis the impression that he is visiting his war front with Israel.”

“We do not believe that any Western leader — or even any Arab leader — could travel to Beirut today and move about in an open motorcade, as Ahmadinejad did”

let alone do so and attract crowds of tens of thousands of eager well-wishers. Security concerns alone would preclude such a scenario. And this is the reality, even though the United States and its European and Arab allies have put significant sums of money and political capital into trying to consolidate a “pro-Western” political order in Lebanon.”

Ahmadinejad in Lebanon: A Mideast Doctrine in Ruins

“As Israeli bombs killed hundreds of Lebanese in the summer of 2006, then-U.S. Secretary of State Condoleezza Rice told the people of Lebanon that they were simply experiencing “the birth pangs of a new Middle East.” That new Middle East was on view during the two-day visit to Lebanon this week by Iran’s President Mahmoud Ahmadinejad — and it looks nothing like the vision pursued by the Bush Administration’s military-driven strategy of dividing the region into “moderate” and “radical” camps locked in a fight to the finish


Lebanon visit nonetheless underscores three harsh truths for the U.S. and its allies


First, Iran is not nearly as isolated as Washington would like


secondly, the Bush Administration efforts to vanquish Tehran and its allies have failed


finally, the balance of forces in the region today prompts even U.S.-allied Arab regimes to engage pragmatically with a greatly expanded Iranian regional role

“You will be filled with shame instead of glory. Now it is your turn! Drink and be exposed*! The cup from the Lord’s right hand is coming around to you, and disgrace will cover your glory, The violence you have done to Lebanon will overwhelm you”
Habakkuk 2:16-17

Iran and Syria, Hezbollah has three structures dedicated logistics of transporting its weapons – about 40,000 rockets

The first unit is 108, which was probably “taken into account” the missile M-6002. His “principal office” is in Damascus. The unit 108 is responsible for transporting weapons and ammunition from storage sites located in Syria and other infrastructure located at the Syrian-Lebanese border, where the Shiite militia has stepped up its bases. This “unit” is subdivided into “normal deposits” and deposits called “reserve”. The first is located near Damascus, Douma, near the Syrian capital, and near Adra, right next to the Damascus airport – close very useful when you know that most of the weapons come from Iran by plane. Reserve sites are, themselves, in the region of Aleppo, Homs and Tartous, Syria still.

Second link in the chain unit 112 is loaded, it, supply depots of Hezbollah in Lebanon, and distribution of weapons supplied by the base unit 108 from the Shiite party, the plain Bekaa, among others. The escorts are made by truck, usually at month end to take advantage of power cuts in that period. To go incognito, drivers are on the anarchy of the plates in Lebanon.

Finally two “specialized sections” of the unit 100carried by members and fighters of Hezbollah, and Iranian experts, moving between Lebanon, Syria and Iran via Damascus airport. It is this unit 100 which had recently secured the return of militia in Lebanon, following a training camp in the use of missiles to Iran Fateh -110. The Party of God does not have enough large camps in Lebanon to practice the use of these missiles to 150 km range


These units confirm the strategic importance of Syria as Hezbollah’s logistical system.


One thing is certain: the face of threats from the IDF, Syria and Iran are close together. The Iranian involvement in the Syrian project of the M-6002 is now “proven”.


A few months ago, we were still at the stage of flight testing. And today? “We can not exclude that vectors produced as a model in Iran have been provided to Syria,” said the expert cited. In return, Tehran would have asked Damascus the provision of multiple copies of the M-600 to the Party of God, in anticipation of a possible conflict with Israel.”