The Amplified translate it this way

Faithful men are like unto Moses; seeking to know the ways of God.

While unfaithful men are like children of Israel, who only come to know the acts of God!, therefore it is written

“He made known his ways unto Moses, his acts unto the children of Israel”
Psalm 103:7

Moses being faithful, was given the great honor & privilege to enter into the promise land to be at Jesus side on Mount Transfiguration

(And will do so again to confront the Beast See: The Time of Jacob Trouble)

Unfaithful men only know the acts of God; therefore God did leave them to die in the wilderness!

Knowing the ways of God; will bring unto you; understanding; that you may know the ways of your enemy

God ways are of truth, the devil ways are a lie!

Remember the May 15th Prophecy warn you

“It used to be the american public was the best informed citizens in the whole world, but now they are the most lied to and manipulated society for propaganda on the face of the earth”

(See: The Unfaithful Posture and Lawlessness)

The U.S. Army illegally ordered a team of soldiers specializing in “psychological operations” to manipulate visiting American senators into providing more troops and funding for the war 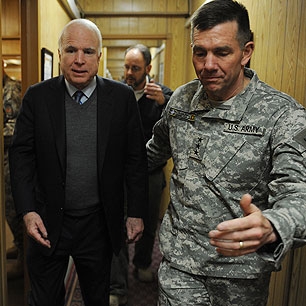 “Rolling Stone has learned – and when an officer tried to stop the operation, he was railroaded by military investigators.


“My job in psy-ops is to play with people’s heads, to get the enemy to behave the way we want them to behave,” says Lt. Colonel Michael Holmes, the leader of the IO unit, who received an official reprimand after bucking orders. “I’m prohibited from doing that to our own people. When you ask me to try to use these skills on senators and congressman, you’re crossing a line.”

** Take note – They’re not trying to “flip” people, rather they are making sure nobody gets “flipped”. Selah

However the funniest part about the whole “Psy Op” ordeal is, the man put in charge to investigate the matter is the same man who used “Psy Op” for the so-called “success of the sure”

The fox guarding the hen house!

“when an officer tried to stop the operation, he was railroaded by military investigators”

“How do we get these guys to give us more people?” he demanded. “What do I have to plant inside their heads?”

When you only know the acts of God, you put the blood on


“the lintel and the two side-posts”


When you know the ways of God; you see Christ!

Did not Moses see Jesus before the cross ?

“The contractions to the “birth pains” will become more acute”

http://english.aljazeera.net/news/asia-pacific/2011/03/2011311607470826.html#
“The whereabouts of four trains that had been running along coastal lines were still unknown, said the East Japan Railway Company. One, a bullet train, had 400 people on board.
As entire communities remained cut off, one exhausted emergency worker said: “We witnessed biblical scenes. Huge container ships were tossed around like matchsticks. There was nothing anyone could do.”
Japan sits on the “Ring of Fire”
That’s the status of Kilauea Volcano, a corkscrewing tunnel into hell
(53 sec)

“The “east rift zone” near the Pu’u ‘O’o Crater, which collapsed over the weekend, and the “middle east rift zone” vents near Napau Crater”
The latter of which pumped 7,000 tonnes of sulfur dioxide into the air on Sunday.
The volcano is shaking with earthquakes continuously.
Hawaii is part of the “Ring of Fire”
Christchurch earthquake: Centre of city faces financial collapse

(See: The Cut Down, Coagulation & the Contractions)

The unfaithful lukewarm, gullible, sleepwalkers the enemy supplies them with lies, like the so-called “success of the surge”

However the May 15th Prophecy warn you

“the “SUCCESS OF THE SURGE” is not base on the simple simon criteria of violence being up or down, or the sublimiual frameing properganda lie of breathing space for reconciliation (which hasn’t happened!)


Because this is war; the “SUCCESS” OF THE SURGE” or failure is base solely on achiving ones objective by advancing ones influence and self interest while halting and demenishing the influence of your enemies


Iran is making it very clear who has won that battle!!”

“Which Arab regime will fall next? The smart money have moved to Yemen, Algeria, Jordan, Bahrain, and the Palestinian Authority”

all regimes that we finance as part of the War on Terror.


Few are betting on the hard-line dictatorships in Syria, Gaza or Iran itself to lose their grip on power.”

“There was a difference in the tone of the Quranic verses revealed to Prophet Mohammad when he was in Mecca, and later when he migrated to Medina”

“The Americans try hard to not be the target of these huge popular uprisings, but will fail because people have realized that the policies of Americans and their cronies are the causes of humiliation and division among nations. As a result, the key to resolving people’s problems rests on ending America’s arrangement in the region.”

Therefore understand the patterns to the uprisings, that you may know the ways of God

“Which Arab regime will fall next? The smart money (and the Al Jazeera cameras) have moved to Yemen, Algeria, Jordan, Bahrain, and the Palestinian Authority”

all regimes that we (U.S.) finance as part of the War on Terror.


Few are betting on the hard-line dictatorships in Syria, Gaza or Iran itself to lose their grip on power

But note that, so far, the only dictatorships that collapsed and the ones that seem most likely to be next are on our (U.S.)side”

“This recognition of the changing political tides favoring Iran, America’s bete noir in the Middle East, can already be seen in Saudi Arabia’s unprecedented decision to allow a port visit by Iran’s warships that traversed the Red Sea and the Suez en route to the Syrian port city of Latika. “

“The occupants of the Beersheba home, hit by the first long-range Grad surface missile to reach the Negev city from the Gaza Strip (30 km away) since Israel’s Cast Led campaign of 2009”


The attack occurred exactly when Iranian Navy commander Adm. Habibollah Sayyari was due in Syria’s”

The home of the Amar family also sustained damage in the Grad attack.


“The Palestinians ruling Gaza are sending Grad missiles as messengers to Israel that they now enjoy Iranian support close by in the Mediterranean.”

“We demand that the prime minister activates the Iron Dome system”

Residents expressed their protest with signs reading “Tel Aviv – you are next.”

and today I ask the prime minister Benjamin Netanyahu

Where is this Arrow (missile-interception system)? Where is the defense? Now I understand how Sderot’s residents feel,”

“What kind of government is this? How long will the south have to exist under the threat of attacks from Gaza?”

“If one Grad can cause so much damage, what will happen during a more serious missile attack on Israel?”

Thus saith the Word of God

“I am will break off every horn (means of defense) of Israel. I am have drawn back His right hand from before the enemy. I am will burn amidst Jacob like a flaming fire consuming all around, I am will punish you for all of your iniquities”

Therefore know the ways of God

Unfaithful men saw the Ark of the Covenant

Therefore see the patterns, remember the May 15th Prophecy point out to you

“We (Judah) have watched and waited expectantly for a nation Egypt or some other one to come to our rescue that could not save us.”
Lamentation 4:17
(See: Hell And The Economy)

“Israel can no longer guarantee that Egypt will remain an ally against Iran. A more accurate interpretation might be that Israel fears Egypt becoming Iran’s ally against Israel”

Therefore know the ways of God

“Put on God’s whole armor the armor of a heavy-armed soldier which God supplies, that you may be able successfully to stand up against all the strategies and the deceits of the devil.


For we are not wrestling with flesh and blood contending only with physical opponents, but against the despotisms, against the powers, against the master spirits who are the world rulers of this present darkness, against the spirit forces of wickedness in the heavenly supernatural sphere.


Therefore put on God’s complete armor, that you may be able to resist and stand your ground on the evil day of danger, and, having done all the crisis demands, to stand firmly in your place.


Stand therefore hold your ground, having tightened the belt of truth around your loins and having put on the breastplate of integrity and of moral rectitude and right standing with God,


And having shod your feet in preparation [to face the enemy with the firm-footed stability, the promptness, and the readiness produced by the good news of the Gospel of peace.


Lift up over all the covering shield of saving faith, upon which you can quench all the flaming missiles of the wicked one.


And take the helmet of salvation and the sword that the Spirit wields, which is the Word of God.”
Ephesians 6:10-18 (Amplified Bible)