God has given through the Spirit the utterance of wisdom and also the utterance of knowledge according to the same Spirit for the Lord God does nothing without 1st revealing his secret to his servants the prophets, therefore no prophecy was ever produced by the will of man, but men spoke of God as they were carried along by the Holy Spirit, therefore their prophecy is TRUE and CORRECT

LastDayWatchers as I was standing upon my post watching, I was compelled in my spirit when a light shined upon me with great brightness overcoming my vision not in pain but in joy; then God spoke unto me

Leon, I AM leading your way, My Word is the path, you are walking in it, therefore you are blessed with finding your strength in My Word while traveling the roads that lead to our temple, you have My light and My truth leading you to the holy hill of our dwelling, you are a pillar written upon with My New Name

Even while possessing little strength you have observed My Word and you have not renounce My Name, therefore I have called you to write down the revelation My Word has given you plainly to speaks of the end which will not prove false, while it seems slow in materializing you know it will be fulfilled exactly as My Word has promised; according to the exact hour of my coming

There will be a few readers, running with the Word of My Patience and will enter into the door opened unto everlasting life

Many others I will come quickly upon to have their faith tested, least I fight against them with the sword of my mouth during the great tribulation, except they repent of their deeds for they shall not know the hour I will counsel them to get from me gold tried and refined in the fire.

Therefore unto the Herald, I have given you this PROPHETIC WORD more FULLY CONFIRMED, to which you will DO WELL to PAY ATTENTION as to a LAMP SHINING in a dark place until the day dawns and the morning star rises in your hearts

Therefore run to the standing place and you will see the curse My Word has place upon the house of the Pawn of Satan George W Bush and his family just as My Word has promised.

Here is the Truth

What do we have? Nothing. Absolutely nothing. Iran is taking over Iraq as sure as you’re sitting there. And that’s the way it is, so it was a huge mistake. Whether people like it or not. and I’m the only one with the vision to have said don’t do it. And I wasn’t even a politician when I said that.”

The May 15th Prophecy pointed out to you that Jeb Bush would shamble forward through Iowa and New Hampshire like the most preppily-dressed zombie on “The Walking Dead.”

“This campaign is not dead, we’re going on to South Carolina.” Bush said, Zombies don’t know they are dead until you drive a stake through their brains, the voting results will be the stakes

The greatest sin from which there is no salvation is to be unrepentant; leaving you down the path of continual lying.

The U.S. national case of God’s curse upon the Pawn of Satan George W Bush is perfectly illustrated in this video

At 2:10 Matt Laurer ask “Did you ask yourself what more could I have done to prevent the attack from happening?”

http://on.today.com/1Pl2nsa
George W Bush responds at the 2:15 with a long “Hummmmm”
(which normally happen we you are about to tell a lie)

The real truth revealed inside the +May 15th Prophecy  is that George Tenet and Cofer Black pitched a plan, in the spring of 2001, called “The Blue Sky paper”

Also, Rich Blee warned “There will be significant terrorist attacks against the United States in the coming weeks or months, the attacks will be spectacular, they may be multiple; Al Qaeda’s intention is the destruction of the United States”

What happened about that warning?

“It remains incomprehensible, how is it that you could warn senior people so many times and nothing actually happened.”

Causing Americans to most mind about that of George W. Bush, is he never apologized,

He never came before the American people and said, I was elected to keep you safe and I didn’t, therefore I’m sorry,

Which is the real reason Jeb is polling in single digits everywhere, and that reason’s name is George W. Bush.

Additionally, the second largest expansion of the federal government came under the stewardship of President Bush 43 with the GOP in control of both the House and the Senate.

Since 2008, the growth has exploded, with more debt added during the Obama administration than all others combined, since 2010, the GOP leadership has approved every single spending measure

Donald Trump is the future of the Republican Party

Trump is sui generis, unlike any candidate of recent times, his success is attributable not only to his stance on issues but to his persona, his defiance of political correctness, his relish of political combat.

Therefore you will see Trump become the next president of  the United States of America with 100% accuracy, because

God’s lion has roared, who will not fear?, the Lord GOD has spoken; who can but prophesy! 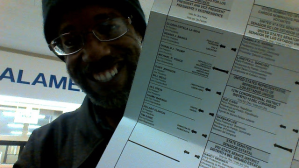 Because Trump wins POTUS November 8th, 2016 just as the Lion from God had roared!

At the ninth hour, Jesus cried with a loud voice, saying, Eloi, Eloi, lama sabachthani? which is, being interpreted, My God, my God, why hast thou forsaken me?
The reason Jesus utter those words on the cross was not an act of doubts, rather it was a statement of faith!
Our Lord was giving testimony to what David had written in Psalm 22:1-31
(See: The Son & The Foot)

The set times (feast days), the numbers & names of God make that no coincidence for those of us today.Selah (See: Posture)

Therefore understand me by doing likewise, let your light shine with your left hand and hold your sword which is the Word of God in your right hand and proclaim

The Sword of The Lord with Leon

THANK YOU ABBA FATHER FOR THE GIFT OF YOUR SON

Leon, My Watchman holding your gaze upon the lesson of My Patience with the expectant endurance that I give you, I AM keeping you safe from the hour of trial which is coming upon the whole world to test all who on the earth

Therefore Amram and Jochebed of Levi and Moses; knew EXACTLY when I AM; the Deliver will come, telling Moses I AM

I AM promised deliverance, there the 3 wise men knew EXACTLY when I AM WILL COME, by reason of their knowledge of the stars the declares the righteousness of I AM

Therefore know I Am will call unto the Heavens from above and to the Earth to judge My People.

Gather my saints together unto me; those that have made a covenant with me by sacrifice, always praying to be found worthy to stand before Jesus who is the LAMB OF GOD

My Watchman shall sound the trumpet and proclaim the glory of My Coming, therefore, I command you the reader to help him (Leon) until I COME!